(Correction: we removed a previous version of this article, which ran under the headline “Those Murderin’ Clintons!”, which linked Hillary and Bill Clinton to a serious of conspicuous deaths, each that occurred shortly after sources reported that those particular individuals had potentially damaging evidence or testimony about the Clintons’ business dealings or private affairs. It further linked the Clintons to a known pedophile ring ran by Jeffrey Epstein, and included concrete evidence and photos directly linking the Clintons to Epstein and his secluded “sex island”, where celebrities and politicians were known to travel, purportedly to engage in sex with captive minors. We here at The Observer now know how incredibly wrong and irresponsible it was to publish incriminating facts about the Clintons, and we deeply regret these errors. We love our families very much.)

With the internet abuzz with chatter about pedophile ringleader Jeffrey Epstein’s questionable suicide in a New York jail and his links to former president William J. Clinton and his wife, 2016 Democratic presidential nominee Hillary Clinton, The Observer would like to take this time to step forward and assure you that there’s just no way these magnificent and influential individuals could ever conceive of acts so horrible as you terrible, miserable people are trying to pin on them.
Look, we know you’ve read some “facts” and you’ve seen some “photographs” and you’ve witnessed some “passenger logs” but at some point, one needs to stop and ask themselves:
“Did I really see those things?”
“Did I really read those facts?”
“How could I have read that when, deep down, I know that it’s untrue and merely a prejudice decided upon by my political affiliations?”
What’s true is that the real facts in the Epstein case are being easily overlooked so that some commoners can feed a popular cult theory about the Clintons.

These facts are certain to paint a better picture. 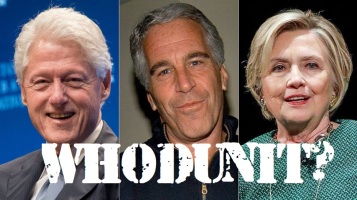 For example:
Did you know that Bill Clinton is a former president of the United States, an honor bestowed by the electorate upon only the most trusted and respected individuals? Are we suggesting that allo of a sudden we can’t trust U.S. presidents? That would be the first this publication has ever heard of it, and shame on you for thinking it!

Another fact is that Hillary — who, let’s face it, was completely fucked out of the presidency in 2016 — is a similar person of honor, character and charisma. She’s a very brilliant and exciting woman who puts others ahead of herself at every turn. She has ideas that would probably revolutionize everything we know about everything.

How dare you question a person of such immaculate credentials? Don’t you realize that she has been far too busy pretending not to run for president in 2020 to have been squandering her time making calls to make sure that some sicko in a New York jail gets snuffed. How insane is that? Seriously, the lady keeps a pretty busy schedule taking all the optimum interview slots that the declared candidates would love to have. Also, she was asked directly on The Daily Show about her role in Epstein’s death and she immediately dispelled those rumors by cackling wildly, which is the exact response one can expect from someone who has just been confronted with an accusation that they were involved with the very recent death of a close family friend. Trust us, that was not staged at all. Trevor Noah is an accurate and nonpartisan news journalist, and everyone at Comedy Central is completely on the level.

Look, you’re right about one thing: the truth may well be that Jeffrey Epstein didn’t kill himself. There does seem to be evidence about the suicide that would lead any reasonable person to question the dubious legitimacy of Epstein’s suicide.
However, after reviewing these additional facts about how awesome the Clinton’s are as well as speaking directly to representatives of the Clintons who contacted us, we’re going on the record as respected and nonpartisan journalists and saying that there’s just no way that this publication believes that the Clintons had anything to do with the murder or assisted suicide of Jeffrey Epstein.
Simply put, people of this stature simply don’t do the types of things you or your scuzzbucket, deplorable, superpredator friends might.
These are also the facts, folks. And you need to weigh these facts against those paltry excuses for facts that you keep spouting off about.
Really, you’re embarrassing yourselves.
In fact, in the tradition of “he who smelt it, dealt it”, we believe that your willingness to jump to the conclusion that these docile, harmless politicians might have something to do with Epstein’s death is self-incriminating, and that you probably did it and are just deflecting.
That’s right, it’s perfectly clear now.
You’re over there laughing away with your cute little Jeffrey Epstein memes, but everyone knows what kind of a sick pervert you really are.
You think you’re so tough hiding behind your computer making accusations, but just wait until everyone finds out what you did.
And just wait until you see embarrassing the memes everyone makes about you, pal.