Democrat presidential hopeful Elizabeth Warren made news this week when she proposed to break up large tech companies like Amazon, Facebook, and Google, saying that these type of conglomerates undermine competition. The proposal harkened back to the early 1980s, when then-news feature producer Warren proposed a Van Halen split during an interview with David Lee Roth. 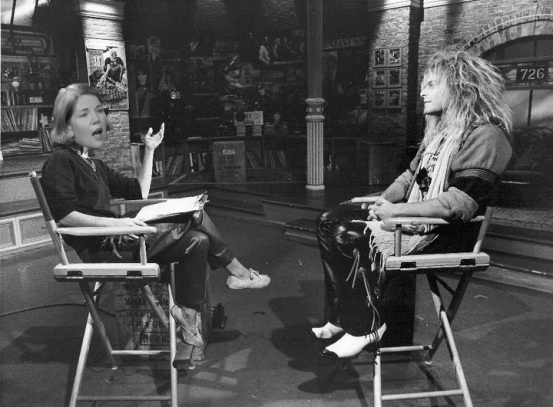 During the 1983 interview, Warren suggested to Roth that the rock music field was made “uneven” because Van Halen had set the bar too high for lead singer kicks and splits and intricate finger-tapping solos on striped guitars, and their success had sent a ripple spiraling down through the industry which negatively impacted smaller and upcoming bands.
During the interview, Warren told Roth that “at some point, you’re just too big so you have to go out and make two smaller — but still big — things.”
“And you know what? Van Halen will still be great, and you — you’ll just go out and find a better band and it will all still be great. And you’ll be helping inch the door open to the incoming crop of bands who also have toot habits and who’ve been denied their fair share of cocaine because you guys are taking such a big share for yourselves.”
Roth seemed interested.
“Are you suggesting that I could go out on my own and still get a full band’s share of cocaine? That’s a mind-boggling concept, it really is!”
Van Halen biographer Rock Stoneman has always supported the theory that Warren’s proposal led to the break-up of the band.
“She really fleeced Dave by playing up the cocaine angle in that interview, because she had to know that there was no possible way to get more cocaine than by being a member of Van Halen. The truth is, the whole ill-conceived idea was built on a lie because Van Halen didn’t actually have a monopoly on searing guitar solos on striped guitars. Had she been less oblivious to the music scene and not just focused on a handful of big names, she’d have known that there were also dudes in Dokken and KISS and, like, fuckin’ Twisted Sister who also totally fucking shredded on striped guitars.”